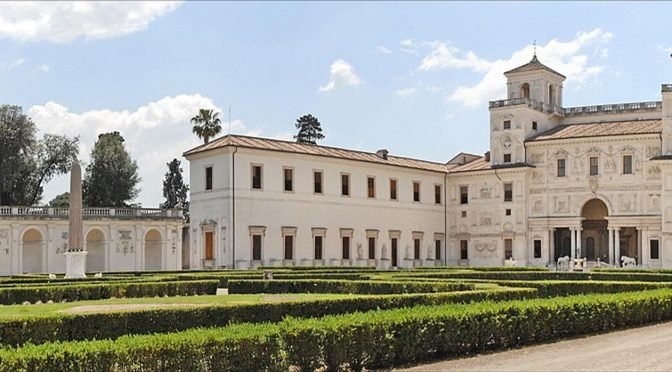 The prestigious French Academy in Rome in the Villa Medici, founded by Louis XIV in 1666, has been accused of “cancelling culture” after meeting with some of its residents who are calling for the removal of tapestries in the Grand Salon.

Sent to Rome from France in 1726, the tapestries were inspired by a series of exotic paintings offered to the Sun King by the former Dutch governor of Brazil, portraying—in his own words—“the whole nation”; its flora and fauna, inhabitants, cities and fortresses.

Due to their links with Europe’s imperial past, the tapestries’ presence in the villa has been called into question by some of the young artists of the French Academy. On 30 September, the villa organised a symposium with residents and historians to discuss the background of these panels and their meaning at the time of their creation and today.

Now, more than 150 art historians and scholars have reacted to the news by signing a petition protesting against this “purification” resulting from “hatred fuelled by extremists”. In France, the term “épuration” recalls the great purge in 1945 of those who collaborated with the German occupying forces, but it is also used to describe ethnic cleansing.

France has largely resisted calls to remove problematic statues and works of art. President Emmanuel Macron even pledged that “the Republic will not erase any trace or name from its history, will not forget any of its works and will not [dismantle] its statues”, even though he admitted in an interview with CBS that, “in a certain way, we have to deconstruct our history to get rid of racism“.

The reaction to the Villa Medici’s meeting was sparked by Didier Rykner, the chief editor of La tribune de l’art, a website, who vowed to “fight with all his might the cancel culture that is gaining strength in France.” He said: “For us, it’s simple, there is no debate — it has no place in the domains of heritage, art history or museums.”

The petition offers its full support to an article published by La Tribune de l’art, denouncing “post-colonial studies as political activism exclusively aimed at denouncing the West by a stubborn insistence on its colonial and slave-trading past.”

Signed by former director of art history at the Villa Medici Jérôme Delaplanche, the petition regrets that “the use of force is no longer a positive value” in history for moral motives and criticises the “submission of institutions and scholars” to the “intellectual terrorism of a Taliban-like minority working to undermine the Western world”.

The conservative daily Le Figaro also claimed that the Villa Medici has been accused of assisting “cultural replacement”, echoing the far-right’s “great replacement” theory, according to which white populations are threatened to be replaced by immigrants.

“New readings of our heritage are possible,” maintains the director of the academy Sam Stourdzé. “The question is not if the tapestries will be taken down from the Grand Salon,” he tells The Art Newspaper, “they will be removed, in January, for restoration works which have been planned for some time now. The question is: how should we decorate the Grand Salon after that? We need an open discussion on this.”