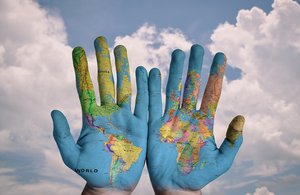 ALL languages are the languages of immigrants, of course – French, German, Russian, Chinese, ALL Asian and African languages. A very typical Guardian article ruined by anti-Brexit pro-mass-immigration propaganda. The ice age meant ALL people left Western Europe and returned but 10,000 years ago. MANY mass movements of migrants in Africa and Asia over the centuries and people took their languages with them. Racist identity politics infects everything now, sadly.

English has always been a language of immigrants. Even before the Norman conquest, much lamented by Brexiters and Tolkien, the language known as “Old English” was brought to Britain by interlopers from what is now Scandinavia and Germany, and mixed haphazardly with Latin left over from the Roman occupation. There was never any indivisible sovereignty of the English tongue, proudly insulated from the wider European melting pot.

But those Anglo-Saxons did have a way with words – “word” itself being one of those that has survived unchanged from the first millennium to ours. Hana Videen’s delightful thesaurus (from the Greek for “treasure-house”) of Old English is, she says, inspired by “hord-wynn” (“hoarding joy”), and organised around spheres of activity: eating and drinking, reading and writing, travelling or the natural world.

There is, though, no word for “nature” in Old English: a salient reminder that those times are as alien in some ways as they are familiar in others. (Videen explains that almost nothing is known about pagan religious practices of the time, which rather vindicates Spinal Tap’s monologue about the druids: “No one knows who they were, or what they were doing.”) There was no call for a word for “nature”, one supposes, because Anglo-Saxons had not yet invented its opposite. They simply lived, like everything else, in “sceaft” – creation. Which was elf-haunted and sometimes wyrm-ravaged.

As it races through colourful examples, the book does also occasionally pause to make an interesting scholarly argument. The long poem Beowulf is the classic of Old English literature – the extant works of which number altogether only around 3m words, i.e. fewer than those of the works of Dickens – and a source for many of the examples here. But Videen also asks, quite reasonably, why the villain Grendel’s mother is so often translated as having horrible claws (or, in Heaney’s version, being a “monstrous hell-bride”) when the phrase at hand (“lathum fingrum”) could, she suggests, be as fairly translated as “badass warrior”? The roots of woman-fear in literature run deep.

As the author invites us to see it, though, her book is in general more like “an old photo album” than a language primer. In one of those etymological journeys full of satisfying twists, Videen explains that Old English “wes hāl” (“be well”) morphed into an alcoholic salutation (“waes hail”, cheers) and then into a name for hot spiced liquor (“wesseyl”) and then into revelry inspired by liquor, “wassailing”. Appropriately enough, then, the book is released in time for Christmas wassailing, and would make a classy gift to the commonly word-drunk.

What is most striking to the modern reader, perhaps, is what strong pleasure the Anglo-Saxons evidently took in smashing words together to form compounds: devil-sickness, slaughter-mist, war-sweat. Some such forms, if deliberately metaphorical or riddling, are known as kennings (as in “beyond my ken”). So “day-candle” is the sun; “bone-locker” is the body; and a “weaver-walker” is a spider. Probably it’s too facile to suggest that such a combinatorial habit of description embodied a view of everything as more interconnected and interdependent, which it might be salutary for us moderns to recover. In which case, it’s a pleasure just to be reminded of their world-craft.